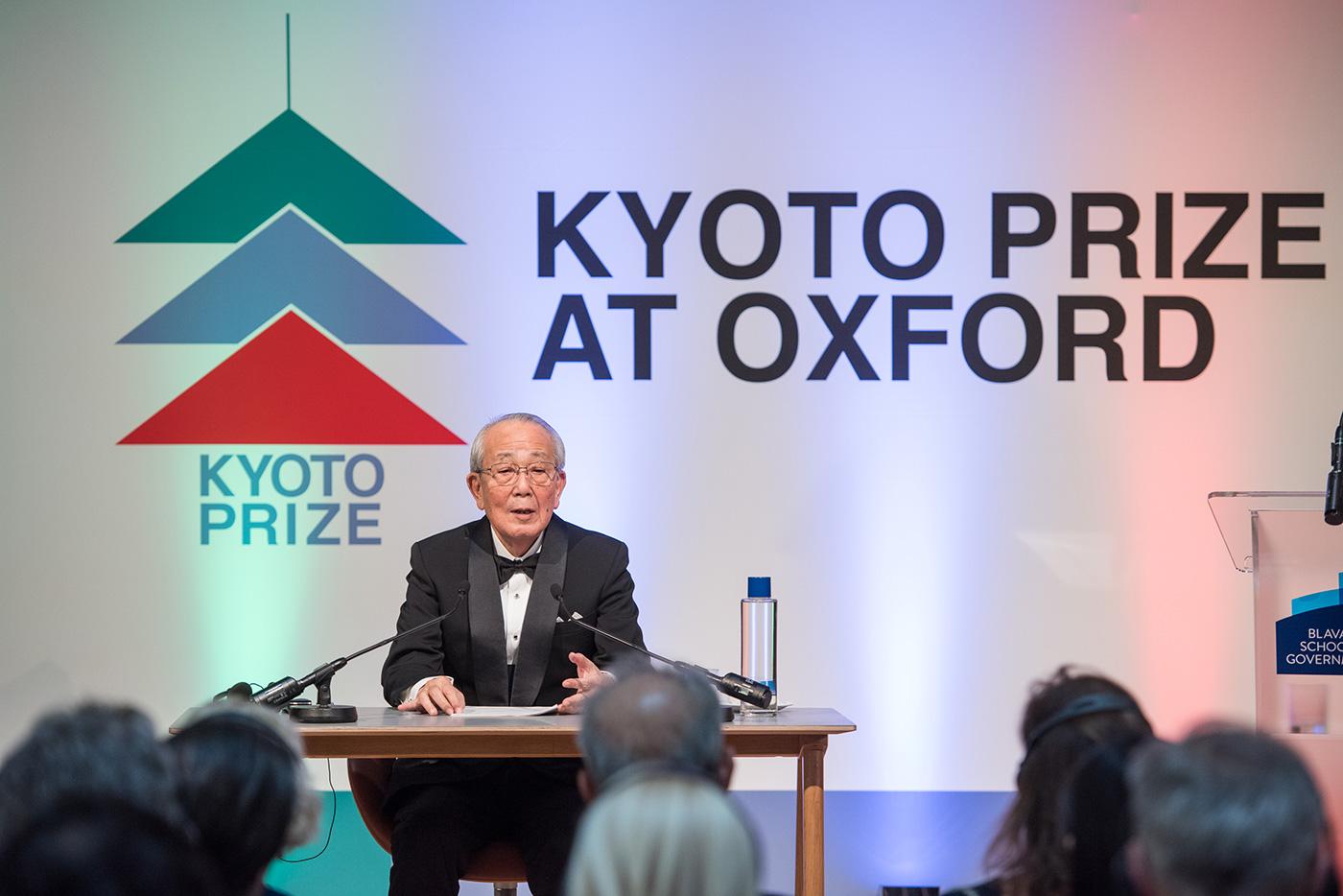 Three extraordinary individuals – the scientist responsible for the development of immunotherapy, the philosopher who created a new theory of social justice, and the roboticist who revolutionised computer vision – were celebrated at the inaugural Kyoto Prize at Oxford event.

The event opened with a panel discussion involving the three Laureates and Professor Ngaire Woods, Dean of the Blavatnik School of Government, about “Values in Research and Teaching” for the School’s Master of Public Policy and DPhil in Public Policy students and alumni.

Introduced by the Chancellor and Vice Chancellor of the University of Oxford, Dr Kazuo Inamori, founder of the Inamori Foundation and of the Kyoto Prize, delivered a lecture entitled “From a society of greed to a society of altruism”. He talked about the importance of creating a new society based on altruism in which human activity can progress in harmony with all other living things.

The lecture was followed by the official naming of the Blavatnik School of Government’s forum space – now the Inamori Forum – and the Chancellor’s Court of Benefactors presentation, which is a formal recognition of the generosity of the most significant supporters of the University.

The second day began with Dr Tasuku Honjo (2016 Kyoto Prize Laureate for Basic Sciences) delivering a lecture on “Serendipities of acquired immunity”, in which he explained the breakthroughs that led to his discovery that the molecule PD-1 could be effective in treating cancer – effectively a 'penicillin moment' in cancer treatment.

Dr Martha Craven Nussbaum (2016 Kyoto Prize Laureate for Arts and Philosophy) followed with “Ageing, stigma, and disgust”, a new lecture based on her forthcoming book. Dr Nussbaum argued that stigma against ageing people is a social problem that generates unhappiness and injustice in the form of discrimination in employment and social interactions.

‘Good research’ solves real-world problems and delivers useful results – this was the topic of the lecture delivered by Dr Takeo Kanade (2016 Kyoto Prize Laureate for Advanced Technology). In “Fun research in computer vision and robotics: Think like an amateur, do as an expert”, Dr Kanade talked about his experience as a roboticist, from developing the first autonomously-driven cars to computer-assisted surgical robots, and the EyeVision system used for 360-degree sports broadcasting.

A crucial part of bringing the Kyoto Prize to Oxford is the opportunity to engage with an array of academics, researchers and students from the various departments and faculties of the University. The Department of Engineering Science hosted Dr Kanade for a visit, Dr Nussbaum held an open session attended by graduate students from Philosophy, Law, Politics and Social Policy, and Dr Honjo spent time at the Dunn School of Pathology and the Weatherall Institute of Molecular Medicine.

Visit the Blavatnik School of Government YouTube channel to watch the full recordings of all the public lectures.

The Kyoto Prize Laureates for 2017 will soon be announced. We look forward to getting to know them before we host them for next year’s Kyoto Prize at Oxford in May 2018.